A couple weeks ago I pulled a Vin Scully redemption from 2016 five star. I knew it was already live, so I went ahead and redeemed it the day that I pulled it. To my surprise, the card arrived Thursday (about 2 weeks time)!

Looking for the following in return:

I also most likely have base or inserts of the team/player you're looking for, so just email me at:

Email ThisBlogThis!Share to TwitterShare to FacebookShare to Pinterest
Labels: Trade

Gary Sanchez absolutely tore up the majors in August and September. In just 53 games he posted a .299 average along with 20 home runs while cutting down 41% of the runners that tried to steal on him. As soon as he started to go on his 53 game tear, his prices skyrocketed. Unfortunately, I didn't own any bowman chrome autographs of his (I really wish I went in on Sanchez instead of Judge), so I decided to wait until the offseason to buy one. The opportunity to buy one finally came and I pulled the trigger.

Why would I be reviewing a product that released nearly 5 years ago? I'm not really sure I know the answer to that question, but it's a product that I opened just a few weeks ago so why not?

The base cards and parallels look amazing. As far as personal preference, the design of 2012 triple threads is one of my favorite triple threads designs next to only 2011. According to cardboard connection, this is the sepia parallel numbered /625.

The other parallel featured in my box was an emerald /250 of Brandon Phillips. There are only 6 different parallels in this product (sepia, emerald, gold, onyx, sapphire, and ruby) and better yet the parallel names aren't absurd! In this years bowman chrome, there were 8 different numbered parallels. In my opinion, that's way too many.

The first pack definitely wasn't a stunner. The first hit was a Nelson Cruz unity relic /36. Even though the card isn't great, it looks great.

I usually wouldn't mind pulling a redemption, but in this case I do mind. The redemption expired back in 2015. Obviously if the redemption had been for something huge I would've been more disappointed, but I can live without a Freddie Freeman rookie auto.

The second pack consisted of an Elvis Andrus auto /99. After making 2 crucial errors in game 5 of the 2015 ALDS, Andrus had the best year of his career in 2016. The final hit made up for the first 3 mediocre hits.

It's nothing huge, but a Tom Seaver dual sided relic /27! The front of the card features Seaver on the Reds, while the back features him in a Mets uniform.

It certainly is a cool card to have.

Posted by Anonymous at 2:57 PM No comments:

This is another break that I did over the holidays. I got it for a pretty decent price so I thought why not. Well I found out why not.

The first card that showed up in the little packet of cards was this Posey relic /149. The design of the cards look surprisingly nice. The card is nothing to cheer about, but at least Panini put effort into the making of this card.

The second card of the break was this Bob Gibson dual relic /25. I would've been happy with this if the box cost me $50, but it cost me quite a bit more and considering there are only five cards a box, this was a pretty rough hit. Not to mention the card was all dinged up.

Great! An auto! Wait, who's Michael Reed? Why is the autograph all screwed up? Poor quality.

Hey, at least I got something semi-decent. If the autograph was clean I'd probably even keep the card, but Panini strikes again! I tried contacting them on social media about the damage, but they won't even respond. Unfortunate.

There is absolutely no way I would buy another box of this. Even if you're looking for a fun break, this is not the way to go! Not only does the break take 45 seconds, it's not fun! At least with triple threads the cards come in a pack within a mini box within a larger box. Who doesn't love opening boxes only to reveal smaller boxes? At least that's something I enjoy doing, I'm not sure about other collectors.

I find myself spending a lot more time collecting Rockies than Yankees. A large part of that has to do with the extremely high prices on Yankees cards; Sanchez, Judge, Torres, Frazier, and even Gardner all have heavy price tags on them. Story? Not so much. Arenado? Not at all. Even though both Story and Arenado play in Colorado, they're still fantastic players. I was reading an article about the inflated numbers of Arenado and other players in Colorado, and Arenado's revised numbers (if he were to play for another team) were still pretty damn good.

I actually pulled the Story from a box of dynasty that I broke on Christmas. Obviously I didn't too well, but I've wanted a Story auto for quite some time and why not my first Story be a dynasty? Trevor Story is a player I'm trying to start a side collection of (obviously not as big as Arenado) since he's a young and exciting player. On top of that, I can definitely see the Rockies contending in the next few years.

The patch is nothing spectacular, but it's still a Story autograph nonetheless!

For awhile I've tried to focus on collecting just Yankees, Rockies, and Nolan Arenado, but I decided to stray away from that small group. I didn't pick this card up because the former MVP played 33 games for the Yankees while hitting a dull .219; I acquired this card because soon he should be inducted into the Hall of Fame. No evidence has led PED's to Rodriguez, but Jose Canseco claimed to have injected him. Either way, PED's don't help you win 13 gold gloves, 10 of them being consecutive. 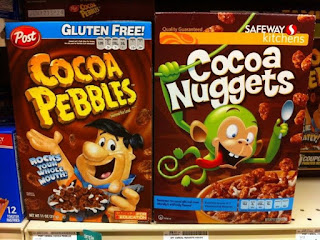 If you had a choice you'd obviously go with Cocoa Pebbles. And if you choose the other brands then... Well you might as well submit yourself to a mental institute.

Okay, now onto the cards. 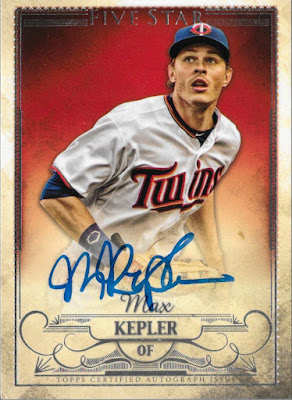 I bought this card before the box of five star. It just so happens that I bought the same card that I would pull an hour later. I'm very high on Kepler and I think he could be an important part to the Twins lineup in a few years, so I'll be keeping both Kepler's. I'm hoping to pick up Kepler in the future. 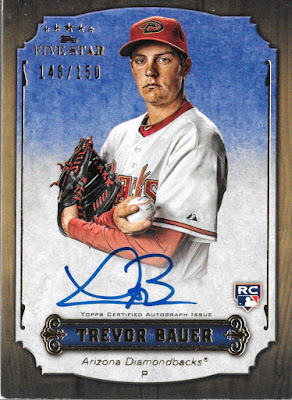 Ever since Bauer pitched in the postseason last year I've always wanted an auto of his. I probably overpaid for this card, but Bauer has been on my want list for awhile now so it was all worth it. 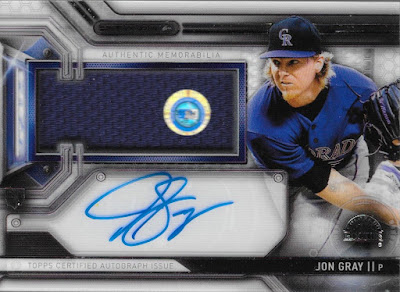 Jon Gray is another player I'm really high on. His 4.61 ERA may not be very intimidating, but he definitely has the tools to be a middle of the rotation starter in the future. I'm really hoping to pick up more Gray in the future, as I love watching him pitch. 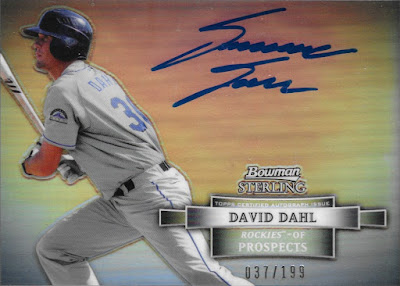 Posted by Frank Massa at 8:39 AM No comments: