Logo Awesomeness Of The Newest Yankee

IT IS FINALLY OVER!!! The test that I've been studying for since November is finally over. I took a look a high school back in October, and I loved it. It specialized in writing and even broadcasting (which is exactly what I want to do when I'm older) so I spent an extra 4 hours on math and language arts every week since November. I don't get the results back until the first week of March, so all I can do is wait. In the meantime, I'll be catching up on blogging. I had a period of a few months where I only scratched out a few posts, and I definitely want to make up for that missed time. Over Christmas, I managed to sell a few legos, and with that money I bought this off of someone on blowout:

Posted by Anonymous at 3:30 PM No comments:

The last box I got for Christmas, was a box of 2015 Topps Museum Collection. I've had great luck with 2015 museum, so I decided to try my luck one last time before the year ended. I didn't do as well as previous times, but it certainly wasn't bad! The only card worth noting is this awesome Nomar Garciaparra premium prints autograph /25:

Over Christmas, I broke 3 boxes of the newly released 2015 Topps archives signature series. The checklist seemed great, and there were a few really cool low numbered cards to pull. So why not give it a shot? Players like Bernie Williams, Paul O'Neil, Mariano Rivera, along with some other interesting names had cards in this product. I was definitely hoping to pull one of those names, but I wasn't disappointing with the names I pulled!

Although I probably could have gotten this card for a 1/5 of the price I payed for the box, it's always fun to pull a Yankee! He isn't in a Yankees uniform, but it's still a cool card nonetheless. Abbott's career lasted 13 years, and he played in 12 of those 13 seasons.

When was the last time I blogged? A month ago? Two months? All I know is it's been too long. I've never wanted to stop blogging, but 5 extra hours of math and language arts work a week has really taken up my time. I had plans to take a flight to Colorado next weekend to visit my sister, but the high school application test that I was going to take last weekend got postponed... So... I had to cancel my trip. I've stopped collecting for the most part, and haven't made a purchase or trade since the end of December. Shocking. Next week is the application test for the high school I want to get into, so after that everything should calm down quite a bit. For now, I want to show off a few recent cards I picked up. 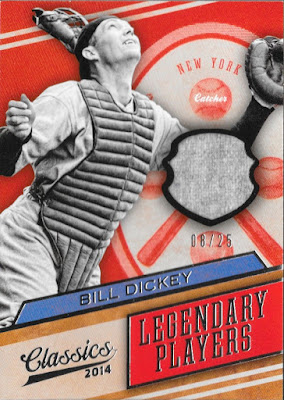 I broke a box of 2014 panini classics on Christmas, which landed me this awesome Bill Dickey relic /25! Not to mention it's his jersey number, 8/25! As a lifelong Yankee fan, I really appreciate pulling this card. As crazy as it sounds I'd take this card over an autograph of a current superstar... Pack pulled cards always add a little sentimental value of course, so this will be one that stays in my collection! 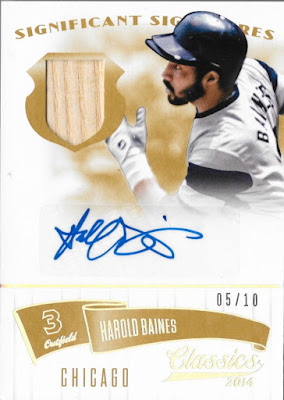 What better way to start the new year off than to get a package from Drew in the mail? Time really has flied. The time between 2015 and 2016 has seemed like a few seconds. One more blink and it'll be next year!

The first card that Drew sent me, is this very interesting Craig Biggio relic. I believe it's from a repack product, but it's still a very cool card! The next card makes the package though.