I won both of these cards in a razz (raffle) for a mere amount of what they're actually worth. I know absolutely nothing about Gavin Lux except for the fact that he's 19 years old and was drafted in the first round of the 2016 draft. He's at least a couple years away from the majors, and I do not have that kind of patience when it comes to prospects. 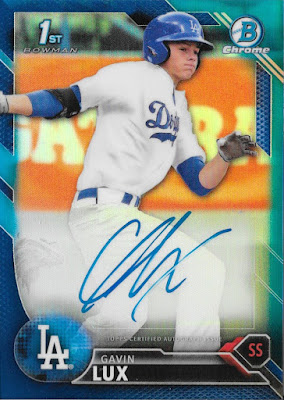 I'll probably end up selling this card, or possibly grading it. I don't think there's anyway I could wait 2+ years to see if a prospect pans out.

Baseball is back! Kind of. Opening day is still 43 days, but spring training is here (Thank God). I've picked up quite a few cards since the last time I posted which seems like forever ago. I ended up selling my Scully, and got a nice chunk of cash for it. I put that money towards some cards that I'd appreciate more, such as this Aroldis Chapman 5X7 1/1 nameplate!

I could care less that Chapman is shown on the Reds on this "card." It's a 1/1 nameplate for crying out loud!

After the Yankees acquired Chapman from the Reds last year, I went out and bought this 1/1 booklet. I sold it shortly after due to Chapman was traded.